A full list of Stephen King works is located at the bottom of the blog.

Our new mini-challenge is described below.  The prize for this round is a surprise! It will be revealed at the end of the mini-challenge.  I love surprises, don't you?

Mini-Challenge Details:
Read one book per month in the three month period.  You must pick a book that contains the quote listed.  (If you have read them all, please leave me a comment and I will come up with a longer list)  You will get three entries in the giveaway, if you read the three books required.  If anyone reads more than three books, they will get one extra entry for each book over the required three read.

Pick your books from these quotes:

“The road to hell is paved with adverbs.”
― On Writing

“The thing under my bed waiting to grab my ankle isn't real. I know that, and I also know that if I'm careful to keep my foot under the covers, it will never be able to grab my ankle.”
― Night Shift

“Go then, there are other worlds than these.”
― The Dark Tower series, The Gunslinger (Book One)

“Humor is almost always anger with its make-up on.”
― Bag of Bones

“Time takes it all, whether you want it to or not.”
― The Green Mile

“Your hair is winter fire
January embers
My heart burns there, too.”
― It

“The place where you made your stand never mattered. Only that you were there...and still on your feet.”
― The Stand

“Dolls with no little girls around to mind them were sort of creepy under any conditions.”
― Desperation

“No one ever does live happily ever after, but we leave the children to find that out for themselves.”
― The Dark Tower series, Wolves of the Calla (Book Five)

“...there's no harm in hoping for the best as long as you're prepared for the worst.”
― Different Seasons

“I'm having a magenta day. Not just red, but magenta!”
― Needful Things

“It was like drowning, only from the inside out.”
― The Girl Who Loved Tom Gordon

“Talent is a wonderful thing, but it won't carry a quitter. ”
― Duma Key

“She can't help it,' he said. 'She's got the soul of a poet and the emotional makeup of a junkyard dog.”
― Under the Dome

“It's a long way back to Eden, Sweetheart, so don't sweat the small stuff.”
― Insomnia

“I believe most people are essentially good. I know that I am. It's you I'm not entirely sure of.”
― Full Dark, No Stars

“You're dead, George. You just don't have the sense to lie down.”
― The Dark Half

“He was a romantic in his own harsh way…yet he was also realist enough to know that some times love actually did conquer all.”
― The Dark Tower series, The Drawing of the Three (Book Two)

“If anyone ever asks you what panic is, now you can tell them: an emotional blank spot that leaves you feeling as if you've been sucking on a mouthful of pennies.”
―  Gerald's Game

The review link up is located in the tab at the top of the blog.

If you have any questions, please leave me a comment or email me at truebookaddict AT gmail DOT com.
Posted by Michelle Stockard Miller at 12:02 AM 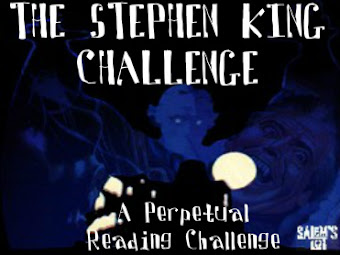 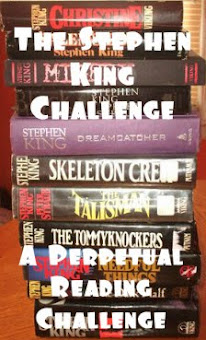 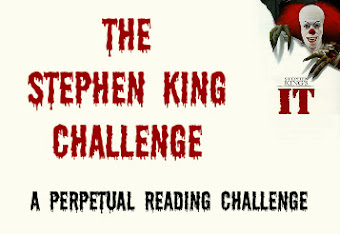